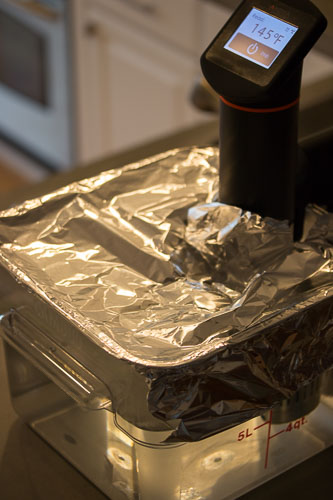 I put the Anova Sous Vide to the test and while it lacks some of the precision or speed of the Polyscience (see Polyscience review here), it is a fantastic immersion circulator and really cannot be beaten for the price.  Read the full review below or click here to find the cheapest buying options.

To be transparent, I received the Anova, free of charge from the manufacturer.  That being said, I have my own Polyscience (read review here) so I have no need for the Anova and will likely just keep it as a backup option.

From the very beginning, you can tell the Anova was produced with an eye towards design.  While the Polyscience looks like a piece of lab equipment, the Anova is a work of art.  Even the packaging is beautiful with a glossy black box and black Styrofoam nestling the machine inside. 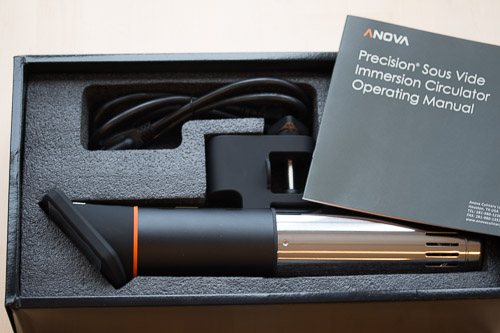 The construction feels durable with a solid heavy feeling plastic top half housing the electronics and a metal based bottom half with the components.  One positive to immediately note is the two halves come apart and the metal portion is dishwasher safe.  This is different than other models that do not come apart making them much more difficult to clean. 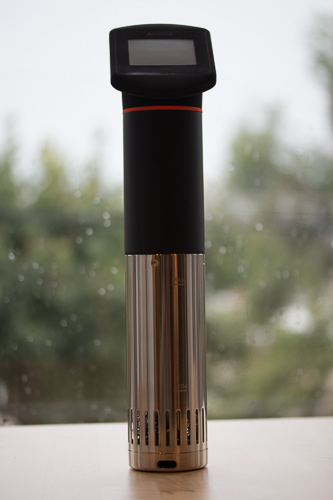 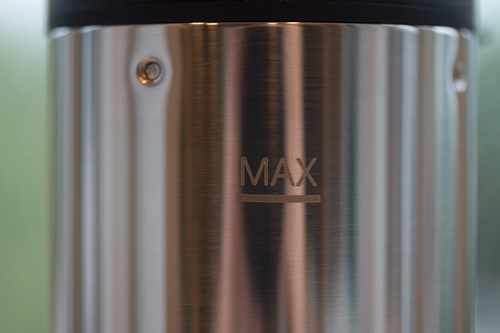 At 15.5” long, it’s roughly the same size as most other models and still fits nicely in the Camwear containers I strongly recommend using (see full review here).  At six pounds, though, it is a bit lighter than some other models, making it a bit easier to use.  It has a very sturdy mount that is easy to use and holds firmly to the container. 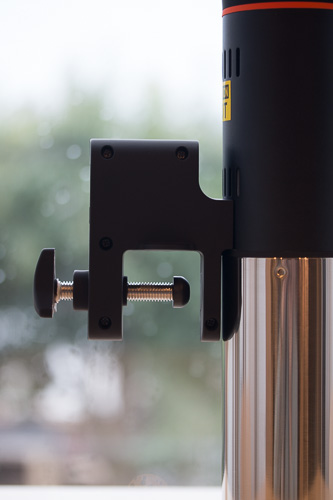 The biggest physical difference is the touch screen interface used for programming.  It’s extremely intuitive and basically has a temperature (F or C) setting and a timer that will either beep or shut the machine down.  The only complaint here is that the screen goes off after 25 minutes so if you want to check on the time or temperature you have to touch the screen to wake it up.  Not a big deal though.  One other thing I did not like was the inability to set a Fahrenheit temperature to a tenth of a degree (though you could in Celsius).   While not a deal breaker, if you are looking for extreme precision, the Anova might not meet your needs. 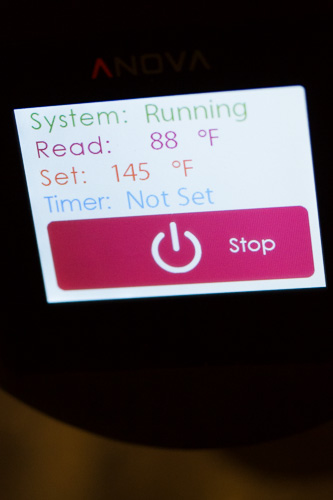 The circulator, in use is extremely quiet.  I almost didn’t believe the machine was even on and had to visually confirm a few times.  The power of the circulator seemed strong enough for the typical eight and twelve quart containers I use, but I did wonder if it could handle the 22 it promises. 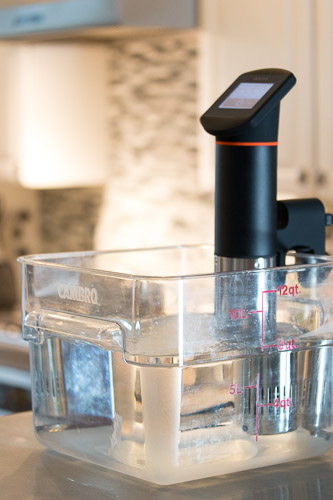 Overall, this is an excellent immersion circulator for the at home sous vide cook.  It would make a fantastic gift for anyone looking to get a bit more creative in the kitchen without breaking the bank.  I found the Anova Sous Vide to work very well, have a solid convenient construction, and to be very user friendly.  The only down sides I noted were the lack of tenth degree precision in the temperature setting and what seemed to be a slightly less powerful motor.  Both of these, however, are nothing when you compare the prices of the two.  Ready to see for yourself?

Click here to see just how cheap the Anova Sous Vide Immersion Circulator is and then compare it to the Polyscience model I have at home.

Learn about me and how I went from a frozen pizza queen to a burgeoning modernist home cook! … END_OF_DOCUMENT_TOKEN_TO_BE_REPLACED