This dish is very easy to make look beautiful without much effort and is one of the few recipes in Thomas Keller’s Under Pressure a newbie can attempt.  It does take a significant amount of time, but if you plan well and do it over several days the compilation and finishing touches are minimal.  This is another component dish where leaving one or even two of the ingredients off the plate won’t be detrimental.  So if some of the pieces seem to difficult or time consuming just skip them.

The bone marrow is really the lengthiest part of this dish since you’ll want to spend a few days drawing out as much of the blood as possible.  If you’ve read some of the other recipes that feature bone marrow (Bone Marrow Sauce), you may wonder why the extra step is needed here and not there.  In this recipe we’ll essentially be using the marrow raw with a quick fry at the end.  So it’s important to have a very clean and pure product.  In the sauce recipe we cook the marrow at 185°F for an hour so we’re killing anything bad that might be lingering. 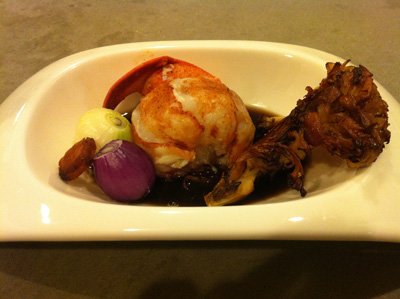 Hen of the Woods

Hen of the Woods

Learn about me and how I went from a frozen pizza queen to a burgeoning modernist home cook! … END_OF_DOCUMENT_TOKEN_TO_BE_REPLACED