Mushroom Ketchup is not actually ketchup in the way Americans traditionally think of it.  It’s more similar to a Worcestershire sauce that’s been flavored with mushrooms.  It’s very popular in England (and extremely so in the 1700’s) so finding it in the US can be a bit of a struggle.  Amazon sometimes has the most famous brand, Geo Watkins, in stock; but more often doesn’t.   I personally was able to find it at Jungle Jims in Cincinnati, which has  a very large international section.  The recipes this ingredients is featured in (Mushroom Cappuccino & Mushroom Parfait) both take a lot of time to make giving you no excuse that you didn’t have time to locate the ingredient. 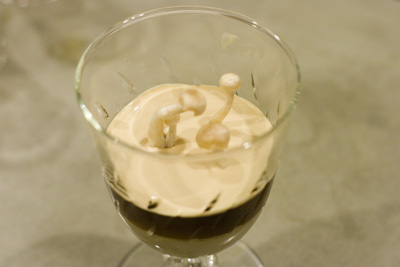 Mushroom Ketchup is a small but powerful component

Learn about me and how I went from a frozen pizza queen to a burgeoning modernist home cook! … END_OF_DOCUMENT_TOKEN_TO_BE_REPLACED