Transglutaminase is more commonly known as ‘meat glue’ which somewhat simplifies what it actually is.  Transglutaminase is a natural enzyme that forms covalent bonds between protein molecules.  They occur naturally inside the human body and were first discovered through the study of blood clots.  In food, it is often used industrially in the production of non-uniform cuts of meat like fish balls and imitation crab.  It has gotten a bad rap in some publications from the speculation that restaurants or grocers can use it to give consumers the illusion of a fully in tact cut of meat.

In modernist cooking, Transglutaminase can be used in a variety of preparations including sausages without casings, making meat or vegetable pastas, or in the chicken recipe featured on this blog.  This ingredient can be hard to find, but it’s usually available here. 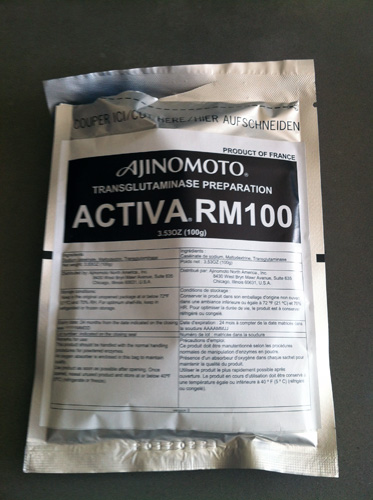 Learn about me and how I went from a frozen pizza queen to a burgeoning modernist home cook! … END_OF_DOCUMENT_TOKEN_TO_BE_REPLACED