This stock is based on the recipe from Heston Blumenthal at Home and is used in the main course of the New Year’s Eve 2012 dinner.  It takes a significant amount of time (over 4 hours) but you end up with 2kg worth so you can and should freeze it in Ziploc bags in 250ml or 500ml (about 1 or 2 cups) portions or future use.  It adds instant flavor to any beef dish you are making whether in a sauce, stir fry, or soup.  It tastes infinitely better than any of the stocks or bouillons you can find in the grocer. 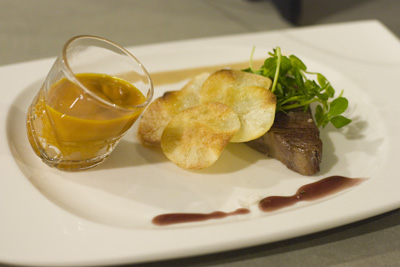 Despite this being a 4 hour recipe the pressure cooker cuts down on the time significantly (think 8 hours otherwise).  The pressure cooker keeps the all the liquid and all the flavors encased in the pot so you don’t lose them through evaporation as in traditional stock making.  Additionally, in a pressure cooker the liquid reaches temperatures of nearly 250°F without coming to a boil.  This results in even greater depth of flavor being extracted from the components without the murkiness caused by a turbulent boil.

Learn about me and how I went from a frozen pizza queen to a burgeoning modernist home cook! … END_OF_DOCUMENT_TOKEN_TO_BE_REPLACED