Today is another easy day.  All I really need to do is work on the dessert and check on those pesky edible wrappers.

First I’m working on the apple flavored cake.  This is the second time I’ve made the cake so I’m not worried about technique.  This time though I am adding a few drops of apple flavoring (used in candy making) to try and punch up the flavor.  It starts with cooking the apple sous vide and while that’s going, starting the ginger custard that will garnish the dessert.

The ginger custard is the next thing to be cooked sous vide.  Anything with egg really benefits from being cooked sous vide.  An egg’s texture is directly related to the temperature at which it is cooked.  Most cooking methods are inherently uneven; the liquid or food directly touching the food is different than the temperature of the center of the food or liquid in the pot.  Cooking the custard at it’s precise temperature of 179°F ensures the custard is cooked through without being broken or turning into scrambled eggs.  My first attempt at this couple weeks ago resulted in ginger flavored scrambled eggs because I had left the water temperature at 185°F…awesome.

Cooking any liquid sous vide is best done with a chamber vacuum sealer, but there are adequate substitutes.  You can get rid of as much air as possible just by rolling the bag until the liquid comes right up to the edge and sealing it.  Alternatively you can place a corner of the bag in the water with the top open and slowly submerge the bag forcing the air up and out.  Continue submerging until only a corner of the open bag is out of the water and seal.

Moving on to the cake which is fairly traditional but this time I’m adding some apple flavoring (typically used in candy) to give it some oomph. 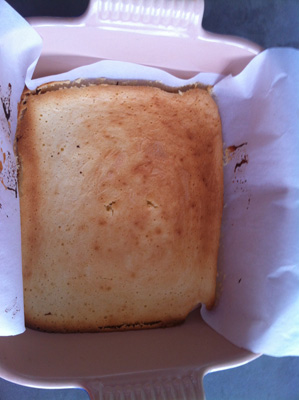 Second wrapper..non existent.  Fine, 18 more.  Next one, tears in half.  Next one, tears in tiny strips.  Next one, won’t come off in any semblance of a piece.  Next one…not dry.  And it is with that; two attempts at wrappers spanning 48 hours, that I give up.  My guests will have plain old ordinary caramels and they’ll like it.  Damn you Heston Blumenthal for saying “The edible wrappers aren’t hard to make.”  This man has a misunderstanding for what the word difficult means.  You will notice there is no recipe link.  I would not want any reader to experience the frustration I have.

I’m checking the caramels off the list as ‘green.’

Learn about me and how I went from a frozen pizza queen to a burgeoning modernist home cook! … END_OF_DOCUMENT_TOKEN_TO_BE_REPLACED